2020 Decade: Late Gen-X/Elder Millennials are being setup for what the majority of Baby Boomers have done

There's no way to properly summarize what has happened in the lifetime of late Gen-X and elder Millennials.  We were born into a World that was dominated by Baby Boomer culture and rule.  Many of us grew up in homes that had parents who were absent, abusive (such as having untreated personality disorders such as Narcissism Personality Disorder (NPD) and Borderline Personality Disorder (BPD) which resulted in massive trauma for us, such as Post Traumatic Stress Disorder (PTSD)) and careless for what was going on in the World.

Personally, I grew up in a Neo-Conservative (NeoCon) area(s) that had issues with the previously mentioned mental disorders and racism/bigotry.  Most of these types worshiped the Government blindly, never researched who they were voting for (only what letter was next to their name), worshiped whatever Mainstream Media (MSM) television/radio/print told them and willingly gave up the rights and future of their children and generations onward, with their voting habits.

Racism/Bigotry and the other issues that were highly prevalent with the Baby Boomer generation, were dying with us late Gen-X/elder Millennials.  We had made friends based off who we wanted to because of who they were.  We didn't care what people looked like and it's not even something that crossed our minds.  If anything, we seemed to be the first people that looked at the Soul of a person before anything else.

This is something that is hard to let young Millennials/Gen Z/Gen A know.  They are being taught by MSM that racism/bigotry were never going away and were living on through us.  In due time after the Baby Boomer generation passes away at the end of the 2020 decade, those in charge of us, The Powers that Be (TPTB) will vilify late Gen-X/elder Millennials as the enemy; they already are by suppressing the history that we rejected the establishment and wanted to be free and living peacefully with each other.

Late Gen-X/elder Millennials also rebelled against the culture of Baby Boomers with sarcasm, jokes that offended them and reclaiming language that they have previously used as slurs (things that post-2013 are consider "hate speech" or otherwise).  How we fought against the Cultural Establishment online with our own created communities and culture, have been flipped as being the problem.  As previously mentioned, racism/bigotry and many other cultural issues died with our generations.  It wasn't until after 2007 that West Coast wealthy college individuals began to revive what was dying, by not understanding sarcasm/joking or any form of communication other than "everything is literal."

Context is key, and Trolling is beyond these types and their authoritarian thinking.  They lived in an absolute bubble and made no effort to learn all of the different cultures that each State (even down to each town locally) can have.  A classic case of projection (thinking only in terms of race/class/etc. and that how their close-minded way of thinking, is how everyone else in the World must think) and these types essentially becoming a version 2.0 of the Baby Boomer generation in their way of thinking and otherwise.

In 2021 (arguably beginning in 2007), this USA West Coast wealthy college Group Think is shaping culture across the entire World.  This can be objectively seen through Social Media and how much it has changed from being platforms of free expression in the early 2000's (that was absolutely critical for them to even gain traction and build in the first place), to banning the President of the United States (something so absurd that it would be inconceivable before the year 2021).  No matter what the personal opinions are about the 45th president, this is problematic.

Personally, 2007 was a turning point for me when I learned about the Federal Reserve being a private banking institution and not being part of the actual Government.  Then other details about how World Trade Center 7 (WTC7) collapsed on September 11th, 2001 (even though no plane hit that building).  It took NIST years to finally release an "explanation"[1] why this even happened.  The biggest questions came from what apparently were stored[2] in that building.  Finding out from Secretary Mineta with his report to the 9/11 commission[3] that Dick Chaney ordered NORAD to "stand down" against the hijacked airplanes was beyond alarming.  So the rabbit hole journey began.  The public was mislead about Iraq and it's "WMD's"[4] and a war that spanned for decades resulting in over 770 thousand deaths.[5]  To anyone who can objectively look at even just these pieces of information, it's wrong to blindly trust these entities without question.

That is however, what the Baby Boomer generation did with us.  They did not listen to what we had to say because of research that came from "the computer" and not "the TV."  If you're from the late Millennial/Gen Z/Gen A groups, this is going to sound absurd to you; yet, this was our reality.  I nearly lost my job for bringing up some of these points back in 2008 (especially Government civilian domestic spying that was later confirmed by Edward Snowden[12]). I was warned that I could not speak about this information on my own YouTube channel or I would be fired.  The insanity never ended as I entered into politics that year and worked with the Constitution Party to get Presidential Candidate Chuck Baldwin placed on the Maryland voter ballot.[6]  I did this as a result of Ron Paul being robbed[7] of the Republican nomination and not having a reason to trust the Two-Party system.

My journey in the politics field grew as I became an Independent Journalist, first writing[8] independent contributions for the WashCo Chronicle, to later for Liberty Chronicle Independent; eventually becoming Editor-In-Chief for the news site.  The more I would investigate, the worst things would become.  Trying to catch up anyone born after 1996 on how much has occurred is a herculean task that may not even be possible for most who grew up in the MSM culture (which is legally allowed to lie[9] to you).

While looking up links for reference in writing this, it is terrifying at how much the internet has changed as many legitimate sources and links that were widely available 15 years ago, do not even show up in search engines such as Duck Duck Go.  The content available on search engines began changing drastically after 2011 and most of us were too busy to archive things/or even thought about doing it.

My warning to all of you who are from the 1996 onward crowd, they're going to make late Gen-X/elder Millennials "the Bad Guys." We were fighting against the corruption that the Baby Boomers were so content with, and enabled.  We risked so much and lost.  MSM will begin to paint us as your enemy for everything that is wrong, so you will not fight against what is the true issue.  Examples such as the PATRIOT ACT,[10] NDAA[11] and so much more that has occurred in the last 20 some years. Government has no issue with experimenting and hurting its own people as seen in the Tuskegee Syphilis Study[13] where Black Americans in the hundreds were abused. Imagine what you don't have on public record and still putting full faith into this.

Personally, I'm sorry that more of us did not stand up and fight.  I have lost nearly everything I have ever gained for standing against TPTB for my near entire adult life.  Business, wife, possessions, being framed, nearly everything.  There is no justice in this current World, and there will not be until the return of Jesus Christ.  That is the sad reality of things and I don't hate you for those of you who will end up hating me due to what the MSM and TPTB tell you.  I only hope that you escape this madness by accepting Jesus Christ as your Savior:

“For all have sinned, and come short of the glory of God” (Romans 3:23)
"For the wages of sin is death; but the gift of God is eternal life through Jesus Christ our Lord.” (Romans 6:23)
“For God so loved the world, that he gave his only begotten Son, that whosoever believeth in him should not perish, but have everlasting life.” (John 3:16)
“But God commendeth his love toward us, in that, while we were yet sinners, Christ died for us.” (Romans 5:8)
“Behold, I stand at the door, and knock: if any man hear my voice, and open the door, I will come in to him, and will sup with him, and he with me.” (Revelation 3:20)
“That if thou shalt confess with thy mouth the Lord Jesus, and shalt believe in thine heart that God hath raised him from the dead, thou shalt be saved.” (Romans 10:9)
“For whosoever shall call upon the name of the Lord shall be saved.” (Romans 10:13)
“For by grace are ye saved through faith; and that not of yourselves: it is the gift of God: Not of works, lest any man should boast.” (Ephesians 2:8-9)
“For I am persuaded, that neither death, nor life, nor angels, nor principalities, nor powers, nor things present, nor things to come, nor height, nor depth, nor any other creature, shall be able to separate us from the love of God, which is in Christ Jesus our Lord.” (Romans 8:38-39)

I will most likely add more to this in the near future, but wanted to get this bit of information at least for now.

Email ThisBlogThis!Share to TwitterShare to FacebookShare to Pinterest
Labels: 2021

January 8th, 2021 Banned From Facebook without a Reason Provided 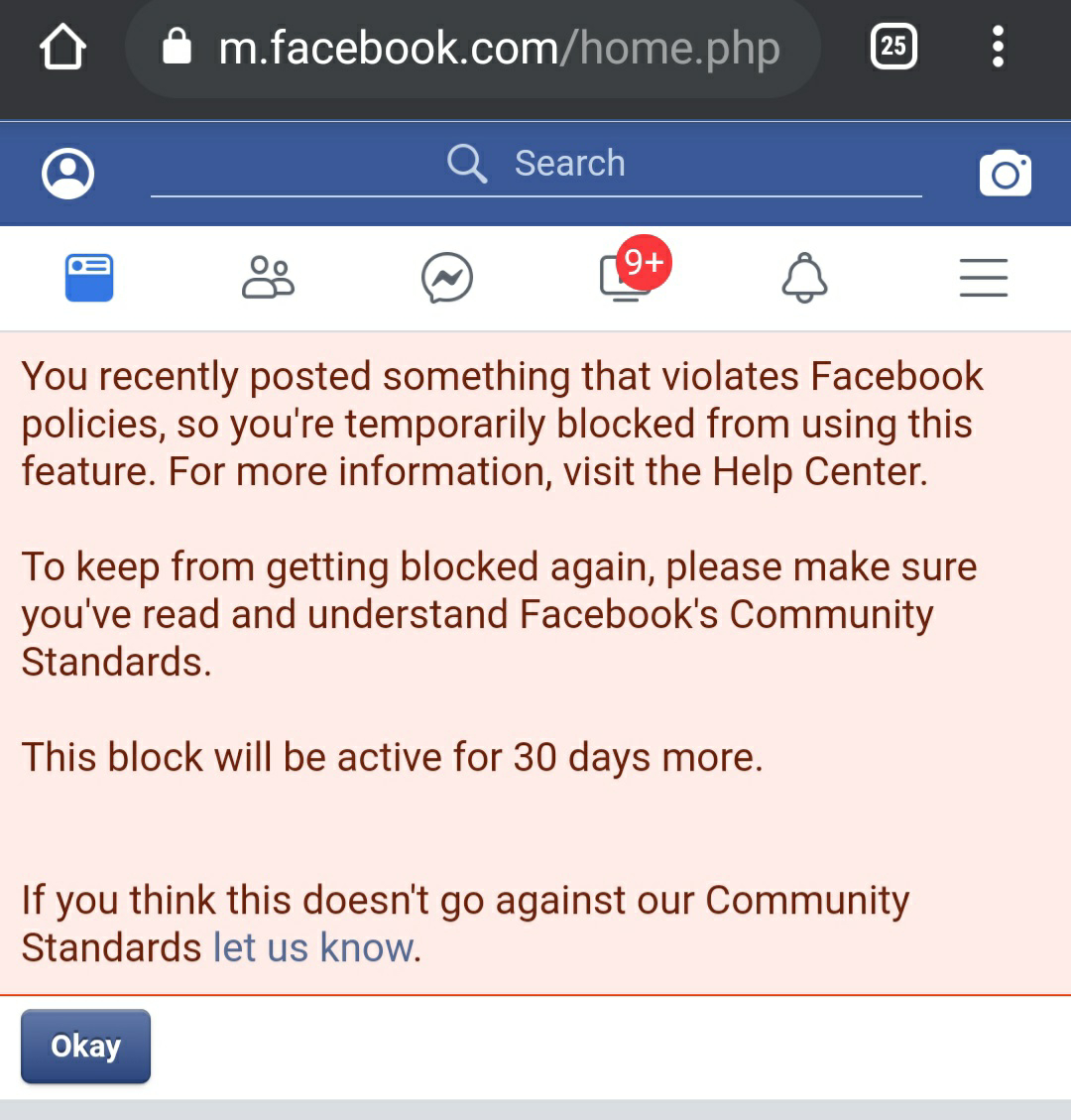 On January 8th, 2021, I was effectively banned from Facebook without any reason provided other than the vague statement of "posting something that violates Facebook policies." There was no other reason provided. Posting, commenting, reacting to posts, sharing, using messenger, pages, etc. are all disabled. There is no way to appeal this decision either. How is one to avoid repeating the same mistake (that implying it was an actual violation in the first place) if they are not told what it was?
Fast forward to January 11th, 2021, Ron Paul experiences nearly an identical treatment. The same day I was banned, so was the President of the United States. If anyone were to try and say Ron or I'd ban were related to Trump's, they were not. Ron Paul was outspoken of the 45th President and I certainly didn't give him a sweeping approval either. Perhaps it was Ron's article on the "Great Reset."
We are in very dangerous times when the "Public Square" of discourse is in jeopardy as much as it has been in the last few years. Today, German Chancellor Angela Merkel called Trump's ban from Twitter "problematic." There are cries from supporters of censorship that "Facebook/Twitter/YouTube are private companies and can do whatever they want." Private companies do not receive tax payer funding, such as Facebook has.
These are very dangerous times and it is highly unlikely things will get better before getting much worse. If anything, "better" does not even seem possible after the progression these companies have taken direction towards.
Originally written on 1/11/2021
Posted by David Malekar at 8:13 PM