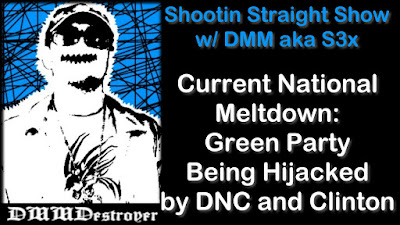 
The Green Party on a national scale is imploding and it's sad to watch.

Half of the people online (in subreddits /r/jillstein and /r/GreenParty for example) seem to be going Pro-Hillary and they are downvoting anyone who challenges the current election recount or criticism of Clinton and the Democratic Party.  This is a blatant and obvious infiltration of the Green Party.

I ask my Brothers and Sisters in the Green Party to stand up and FIGHT back!

The 2016 Vice Presidential candidate, Ajamu Baraka is calling this out and everyone should be listening to him:
http://www.cnn.com/2016/11/29/politics/green-party-recount-criticism/

The Democratic Party knows that the Green Party is the last stand against them, and they want to be the ONLY party that represents folks on the Left.  The Green Party has the potential to destroy the Democratic Party for good, and this is why they are trying to Trojan Horse their way in.  They know that if they destroy you, they will have the Left on complete lock-down.

If you ignore all of the Wikileaks, and nearly everything the "Right" has said to you about Clinton, the corruption of the Democratic Party and Clinton shows by Bernie Sanders getting screwed out of the Democratic Party's nomination for President of the United States, this year.  That's all the proof you need that these people can not be trusted.

They propped up a candidate that said minorities should be "brought to heel" and called them "super predators."  Clinton did not support Marriage Equality until 20+ years later in her political career.  She is a professional liar.  You do not need this in your party, Green.

Libertarians will stand with you and your fight to keep your party going, as we are all allies against the Duopoly.

When asked if the Libertarian Party could be vulnerable to this as well, Bob Barr comes to mind, who ran in 2008. There was a NeoCon attempt to take over the LP, then.
Libertarian Party of 2008 had a similar feel to Green Party of 2016, on the verge of a revolution and huge spark. Because of that, the Republican Party's NeoCons saw this and decided to try and kill the party from within.
My fear is, the Greens are not as resilient as Libertarians and may just allow it to happen. Unlike the LP that stood their ground and was able to bounce back for 2012 with (at the time) an on fire Gary Johnson.
Libertarian Party is too big now to get knocked out, but the Greens are still small (like the LP of 2008) and are AT HUGE RISK of getting destroyed.